Saw this as a birthday treat at the GFT, coincidentally Alasdair Gray has a cameo.
A whiff of David Lynch and Vivian Stanshall permeates the entire proceedings Absolutely wonderful stuff. 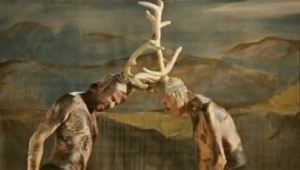 Posted in Other Stuff

Not a gig as such, but quite an experience (and at fifty quid a skull, I suppose it should be). To celebrate their fortieth anniverary, ‘The Chip’ commissioned Alasdair Gray to create a 3D painting. Elsewhere in the restaurant other visual goodies were going on e.g a virtual sea scene on the flooor (projected from above) that rippled as waiters and diners walked through it. I was quite taken with this and you can see the virtual fish swim from Rhurschach’s feet to my own. Mr Gray was in attendance and did a Q&A with a bloke from The Herald. He, Gray, suggested that his efforts perhaps required further effort(s) and I would agree.
It looked like leftover scenery from Noggin The Nog!

Later, while sitting at a table next to us, AG commandeered a malt from the bar that was so large, fish could have navigated around in it. We wore 3D glasses for the duration and Shields whooped with delight, as we seemingly travelled through a giant floating salmon and could almost play heidies with columns of spinning scallops. It was reminiscent, at times, of some of the animations from Yellow Submarine but happening in mid-air right in front of you

For those foodies who want to know the menu it was;

After that we had ’Rioja glazed shin of beef, marrow beignet, shallot essence, potato and sage gnocci’. This was a tad disappointing and I made this known to the waiting/kitchen staff but was rubber-eared.

Posted in Friends and Family, Other Stuff