With a few right stinkers of gigs under my belt recently, it was hoped that Leon R would pull something out of the hat, and what a hat it was. The good thing about these city festivals (Jazzfest, Celtic Connections etc) is you can set your watch by them generally. If the ticket say half seven then that’s when the act steps on stage. Billy Bones, me and Shields met up in what is by far the best city centre ale pub, Blackfriars.

We moved round the corner early doors to discover that the crowd was being shepherded into their seats. ‘Is there a bar, can I take a drink into the hall and is there an interval? I am not an alcoholic!’ I blurted out to the usher who answerd no to all my questions and advised that the show was about to commence. 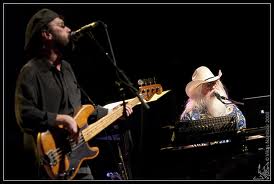 Leon Russell (the nearest I’ve seen to a South Park cartoon made flesh) walked slowly on stage  and wondered aloud how he came to be playing at an International Festival “Seems that sometimes you have to come across an ocean to realise you’re a jazz musician,”. He then played for the next half hour solid but it wasn’t until he started telling between song anecdotes about ‘Bobby Dylan’, Joe Cocker etc. that the show really took off. I’m not an Elton John fan, far from it, but he’s done the music world a great favour by recording The Union with Leon and in doing so, introducing him to a whole strata of listeners that would never have heard of him. His band, two guitars , bass & drums, clearly love the man and are all impressive players to boot, all getting a small solo spot of their own. Chris Simmons in particular is impressive and makes blues noises the likes of which I haven’t heard for decades. Leon’s own style embraces many others, he even plays that Susan Boyle song ‘Wild Horses’!

So bad are his legs that for the encore, he stands at his piano and asks that we pretend he’s gone backstage with the rest of the band before they return and regale us with a Chuck Berry medley. A fine wee night!

This entry was posted in Gigs and tagged City Halls, Gigs, Leon Russell. Bookmark the permalink.