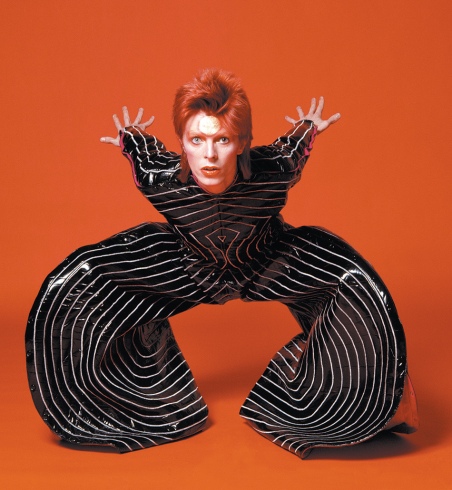 First ticket I had, to see him, was way back in Feb 1972.
‘Hunky Dory’ (not really a success until Ziggy dropped the bomb) was only, at that point, six weeks old and some bright spark of a Council jobsworth, at the pretty little Glasgow City Hall, wouldn’t allow one of David’s props, a Victorian cast-iron bath, on to ‘his’ stage (you couldn’t really make this up, could you?).
As a result, a Mexican standoff then ensued between roadcrew and jumped up janitors, while we few punters (it wasn’t a sell out) queued up outside, tickets grasped in sweaty hands. Quickly the concert was scratched and we, Jinx and I, headed home wondering what we’d missed. As the Ziggy  Stardust and Hunky  Dory albums were both recorded more or less at the same time, it transpires, that on that tour, they were actually playing some Stardust songs six months, or so, before that particular album would see the light of day.
Wish I still had that ticket!
The council cretin was most probably the very same person who, during a concert by the Welsh band ‘Man’, put up the  house lights mid-song and demanded everyone get back in their seats or the show would immediately be cancelled.
By the time DB came back to Glasgow, he had become the fully formed creature we now know as Ziggy .
So my next ticket actually got me into a box, or a ‘Divan’, in Green’s Playhouse. This was just a mere month after seeing some other band, called Led Zeppelin, from the very same seat.

Saw yet another show in the Playhouse (it hadn’t yet changed its name to The Apollo) later that summer when they were doing Aladdin Sane album with Mike Garson on piano. This was immense.

Beefheart, Crimson, Yes, The Faces and The Rolling Stones. I was sitting calmly, and unknowingly, in the eye of the hurricane that we now know was The Golden Age of Rock and Roll but didn’t actually realise it at the time, thinking that it was always going to be this good.

And then ten years later in 1983 I attended the Serious Moonlight Tour at Murrayfield – a show so average I didn’t attend another stadium show, of any sort, for twenty odd years.
Caught the news, as it broke this morning, and was quite surprised how moved and indeed choked I felt.

Actually I caught the news on Radio 6, as it was just breaking, and where I mistakenly assumed it was merely a career review, in light of the new album release, and thought to myself it was quite wrong that they were referring to him in the past tense
“ That’s bad editing, anyone tuning in just now would think he’d died”.
Ninety seconds, or so, later the big penny dropped.