We arrived early!
Perhaps I should have read the blurb a little closer. On seeing that this trio were to feature Led Zeppelin tunes, I somewhat lazily imagined they might pepper up a conventional set of ‘some of our own compositions’ with perhaps three, mibbe four, Zep tunes. Wrong!
On the night in question ten, count ‘em, Page/Plant all time classics were offered up, one right after the other, for our aural delight.

‘Soundbone’ as they’re known, deconstructed, dissected and embellished these ten tunes, pulling and pushing about those juicy riffs, that we all know and love, and also constantly reminded this particular listener of Zeppelin’s subtler moments and melodies. All of this, I should add, was amidst their own improvised soundscapes at the beginning, ending and during the songs in question.

So enamoured with this musical melange, were we, that, a tad distracted, we even began applauding before the completion of Black Dog for which we were ever so (s)lightly rebuked :).

Chris Greive, with his electronically enhanced trombone, led the band through two sets of soundscape/rifferama that was  an absolute joy to behold. He enhances the ‘bone with wah-wah and octave divider FX pedals, controlled from a hand switch, while he plays.
Over the decades, I’ve heard Bruce Fowler and the likes do such things on record, and film, before. This is the first I’ve encountered it in the flesh. The bass effect in particular is very impressive. Punchy and fast. 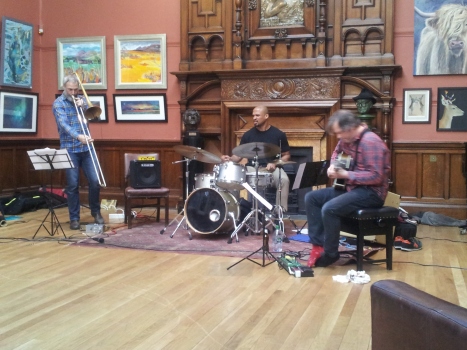 Graeme Stephen meanwhile is, without doubt, the best guitarist I’ve seen perform in this lovely wee venue. Certainly the only one to eschew the wearing of shoes while sporting two odd socks. At one point , during Kashmir, which also featured Greive’s ‘vocoder like’ vocals, Stephen was channelling the spirit of Robert Fripp with a wonderful elongated ‘Sailors Tale’ style shred-fest which sounded to me like some wounded banjo that was quite clearly in distress.

Elsewhere, Whole Lotta Love required a whole lotta lungs, when a didgeridoo was deployed to bring the first set to a close. Drummer David Carnegie was a powerhouse throughout, easily mimicking Bonham’s famous backbeats and navigating his cohorts from section to section. His solo meanwhile, in the otherwise lengthy Moby Dick, was briefer than some drummers’ fills!

Thursday night at The Arts Club is, sadly, one of Glasgow’s best kept secrets. I manage to get along there, most weeks, but it’s never really that busy. More’s the pity, as that’s three particularly good, young, bands that I’ve encountered there in the last six months (namely Preston-Glasgow-Lowe, Chris Whitehouse’s Connected Band & Soundbone)

Tonight’s audience, unfortunately, was of a size that could have departed homewards in the one minibus. It’s a credit to Bill Kyle and Bridge Music  that these things are kept ticking over, despite the recent denial of funding from Creative Scotland

I for one have written to my newly elected MP and MSP (is Jazz devolved or does it just smell that way? ) asking them to kick CS up the arse and get their finger out. Please pardon my mixed metaphors.