To be honest I could have seen this one far enough, having woken earlier in the morning from a poor night’s sleep I just wanted to get my head down. However I’d agreed to meet Spanner in Wintersgills before the gig.

The Captain’s Rest was a new gig for me and, due to it’s location, I opted to drive rather than put myself in the hands of the The Glasgow Underground, which terminates fairly early of an evening. A good couple of hours blethering, on topics as varied as Seventies progressive music and how hard it is to get a gas boiler maintained properly these days, ensued before we realised the hour and scuttled across the road to the venue.

Despite having a name that would fetch a high score on anyone’s Scrabble board, Miaoux Miaoux  turned out to be just one bloke; a young guy who’s obviously spent too much time in his bedroom playing with his rather primitive sequencers.

Imagine someone from your local BB Troop trying to play Blue Monday after one hearing and you’re close! Layer upon layer of beats and samples were trotted out, however, ultimately, this aural lasagne was hard to digest and went nowhere. The final ignomy followed a shout of ‘G’nite!’ whereupon he ran offstage, leaving his machines spurtling and droning away, before having to sneak back on, upon hands and knees, slightly red faced in order to unplug it all. 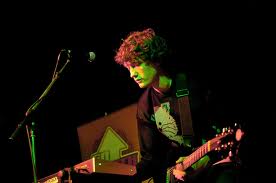